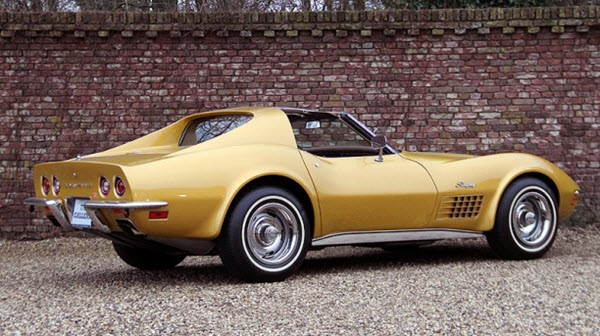 When the headlights of the 1970 Corvette Sting Ray were kept in the down position, they blocked a major part of the cool air flow for the hot radiator. Air to cool down the radiator was therefore pulled from under the car. Another notable change in the 1970 Corvette Sting Ray was how the squared off amber turn signal indicator was surrounded by a so called “ice cube” grill. The 1970 model also had fender louvers.

One of the most interesting new 1970’s features was the introduction of the LT-1 engine. For an additional $448, the standard engine would be replaced by a LT1 350 cu. in. engine capable of 370hp. The LT-1 engine has been described as a solid lifter version of the small block and it received a lot of praise from both die-hard Corvette aficionados and general car enthusiast. Road racers appreciated the new motor since it could provide a lot of horsepower despite being light weight. This was a much sought after feature, since it meant that you could go really fast without loosing control over the balance.

The LS5 was now the only option for those who wanted a 454 cu. in. big block motor: It cost $290 and was capable of 390hp. For nor more than $158, you could get a 350 cu. in. engine capable of 350hp instead of the standard 300 hp. This was a popular alternative and the 350 cu. in. 350hp engine was installed in over ¼ of all cars. The 1970 Corvette Sting Ray has a special place in many peoples heart since it was the last Corvette with a high compression engine. In the future, unleaded gasoline would become standard fuel and high octane gasoline difficult to obtain.