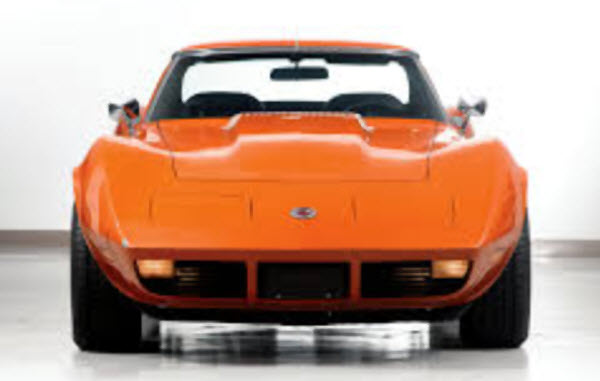 The new safety regulations that had started out quite tentatively during the late 1960’s was in full bloom by the time the 1974 Corvette Sting Ray was designed. Lights and other necessary safety gear for the 1973 model had been created to live up to new safety legislation that required them to withstand a 5 mph frontal impact without being damaged. The bumper system was redesigned to provide a higher level of safety and it was now based on an injected moulded urethane cover. The ice cube style grill and the fender louver had also been removed and replaced by a simpler, untrimmed recess.

You could get your 1974 Corvette Sting Ray in ten different exterior colours: Classic White, Silver Mist, Corvette Gray, Bright Yellow, Corvette Orange, Medium Red, Mille Miglia Red, Dark Brown, Dark Green or Corvette Medium Blue. The available colours for the interior depended on which exterior you picked. If you for instance wanted a Classic White, you could get the interior in silver, neutral, saddle, dark red, dark blue or black. If you instead opted for a Corvette Medium Blue car, your only options for the interior would be silver, black or dark blue.