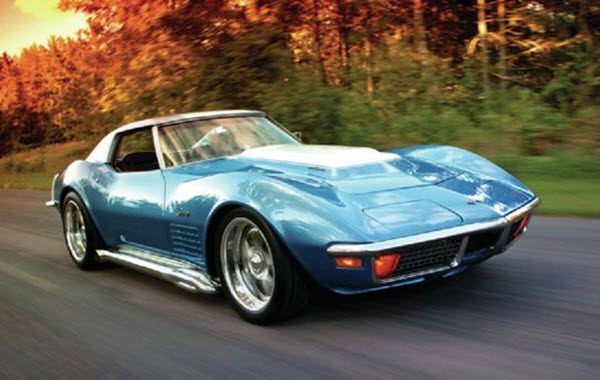 The 1972 Corvette Sting Ray followed the trend of the 1970s where high octane gasoline was dropped in favour of unleaded fuel and the horse power ratings of the “big block” motor decreased dramatically. The 1970 Corvette Sting Ray was the last Corvette with a high compression engine. As unleaded gasoline became the fuel of choice for most cars and high octane gasoline harder and harder to obtain, Chevrolet adhered to new trends and environmental regulations and discontinued the high compression engines. This meant that in 1971, the hp rating for the LS5 454 cu. in. engine dropped from 390 hp to 365 hp. You could still get the LS6 454 cu. in. engine capable of 425 hp, but it would cost you $1,221 and less than 1 percent of the buyers were interested.

In 1972, the LS5 454 cu. in. big block capable of 270hp was still an option for those willing to pay an additional $295. California state legislation did however make it unavailable for California residents. 1972 saw the beginning of California’s famous smog regulations, regulations that were to be followed by many other states and countries.

To see the horsepower rating for the LS5 454 cu. in. engine drop from 365 hp in 1971 to a mere 270hp can seem dramatic, but it has its explanation. The change of fuel is not the only factor here; new standards for measuring horsepower also played a vital role in the sudden decrease. In 1972, a more standardised system cam into effect – a system designed to better reflect real world conditions. The standard engine for the 1972 Corvette Sting Ray was a 350 cu. in. 200 hp engine. For an additional $483, you would instead get a 350 cu. in. capable of 255hp (the LT1), all according to the new horsepower rating system.

Of the1970 Corvette Sting Ray, 17,316 cars had been manufactured and the figure rose to 21,801 for the 1971 model. This positive trend is clearly visible in the figures from 1972 as well, when an amazing 27,004 1972 Corvette Sting Ray cars were produced. Over 75 percent of these were coupes and no more than 6,508 convertibles were made. This was also consistent with the trend of the 1970’s, when more and more Corvette drivers turned their back on the cabriolets and went for the coupes instead.