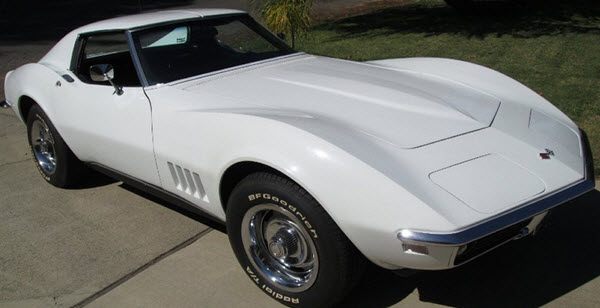 The 1968 Corvette Sting Ray was the first of the third generation Corvettes (C3) and it received pretty hard criticism by the media when it was first released. The new styling was however popular and the body style quickly turned into a classic that would influence new generations of Corvettes for the rest of the century and well into the future.

The 1968 Corvette Sting Ray was bigger than its predecessor, but the interior was actually smaller. The roofline had been lowered to provide better aerodynamics and the seats were therefore angled at 33°. This can be compared to the C2 generation of Corvettes where the seats had been placed in a 25° angel. Another feature that received a lot of criticism was the manner in which the door panels intruded into the passenger area. The 1968 Corvette Sting Ray was considered less comfortable than the C2’s since the amount of support and padding had been greatly reduced, and the centre consol took up more space since it had to accommodate the new big automatic transmission.

If you look closely at a 1968 Corvette Sting Ray, you will notice a lot of small but interesting differences from the 1967 model. The windshield wipers are for instance hide-away and vacuum operated. This was not only an aesthetically appealing solution; it would also improve the aerodynamics of the car. Just as in the C2 Corvettes, the headlights are hidden, but while they were powered by an electric motor in the C2’s, they are vacuum operated in a 1968 Corvette Sting Ray. They would also pop up instead of rotating.

The new body style made it possible to use 1 inch lager wheels than before and the 1968 Corvette Sting Ray therefore came with 7 inch wheels. Another notable difference was the location of the battery and the lack of side vent windows. In a 1968 Corvette Sting Ray, the battery is to be found behind the passengers’ seat. The door released was thumb operated, a solution discontinued the very next year. From 1969 and onwards, a flush mounted keyhole was used instead of the thumb release and the door was opened using a depression plate.