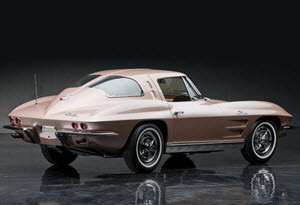 One of the many things that make the 1963 – 1967 Corvette Sting Ray models special is that they were the first to utilize independent rear suspensions (IRS). This new creation was designed by Corvette chief engineer Zora Arkus-Duntov, a Belgian-born Jewish immigrant educated at the Institute of Charlottenburg in Germany. During the early 1960’s, most cars would relay on a live rear axle to take care of most of the rear suspension. This was an easy and trustworthy solution and it was also comparatively inexpensive. The problem was that it wasn’t really suitable for high performance driving. It worked well for cars that were driven at normal speed at good roads, but Zora Arkus-Duntov wanted to create a suspension system more suitable for a high performance Corvette Sting Ray. He wanted a light-weight suspension system that would be capable of handling a few bumps in the road.

A speedy car that can not stay on track when it hits an object or a pothole is naturally a very dangerous car. With an independent rear suspension, a wheel can hit something without affecting any other wheel. The wheel on the opposite side from the surface irregularity will keep its contact with the rood. There is also the question of weight; the current live rear axle solution was very heavy and this extra weight slowed the Corvettes down and also affected their safety. When the so called unsprung weight (the weight of the wheels and the suspension parts) increases, the wheels become harder and harder to control. This means that by decreasing the unsprung weight, you get a car that is much easier to handle on the road. The new IRS solution successfully managed to bring the overall weight of the 1963-1967 Corvette Sting Ray cars down by approximately 100 pounds. With the new independent rear suspension, the contact between the tires and the road surface therefore became much more consistent in the 1963-1967 Corvette Sting Ray models than in the previous ones.

Zora Arkus-Duntov’s suspension system of choice for the 1963 – 1967 Corvette Sting Ray cars was the so called three link design. The system had tree main parts: strut rods, axle half shafts and a radius arm. The radius arm was placed between the frame and the rear spindle support. To keep the solution light-weight, a single multi-leaf transverse spring was used to accommodate both wheels. This also meant that the price difference between the old live rear axle suspension system and the new independent rear suspension would be smaller, even though the IRS still came at a very high price compared to the simple live rear axle solution. The front suspension used for the 1963 – 1967 Corvette Sting Ray cars was still very similar to the one used in older Corvettes, but a few details were altered in an effort to improve ride and handling.