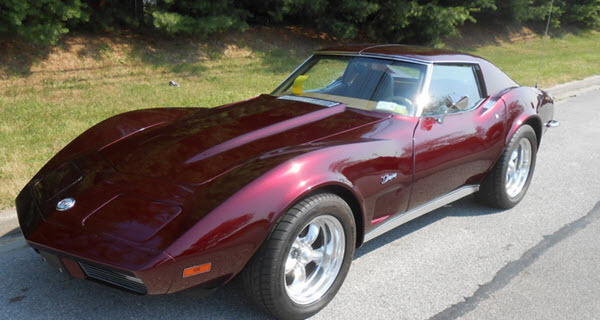 In 1973, a new hood style was introduced. In earlier models, raising a movable panel was necessary for the windshield wipers to work, but the need for such a mechanism was eliminated by the new hood. Another difference between the 1972 model and the 1973 Corvette Sting Ray was the rear window; it was now no longer removable. The idea behind the feature had been to create a more open and flexible feeling, but due to excessive wind buffeting the possibility was hardly ever used by Corvette drivers.

During the late 1960’s and early 1970’s, environmental concern and car safety legislation had a large impact on all cars, including the Corvette Sting Rays. The 1973 was designed to follow new U.S. legislation that required lights and other necessary safety equipment to be able to withstand a 5 mph frontal impact. The new and improved bumper system for the 1973 Corvette Sting Ray was based on an injected moulded urethane cover. Since the paint contained a flex agent, the shade of the bumper was often slightly different than the shade of the rest of the car. Another, more noticeable, difference in the new Corvette Sting Ray was the discontinuation of the ice cube style grill and the fender louver. In the 1973 Corvette Sting Ray, they were replaced by simple, untrimmed recess. As for environmental concern, a California Emission Test option was available for $15 and purchased by almost 10 percent of the buyers.

The 1973 could be obtained in ten different exterior colours: Classic White, Silver, Yellow, Metallic Yellow, Orange, Mille Miglia Red, Medium Blue, Dark Blue, Blue-Green and Elkhart Green. The available interior depended on which exterior colour you chose. If you for instance went for the Classic White exterior, the interior could be dark red, dark saddle, medium saddle, black or midnight blue. If you instead went for the Elkhart Green exterior, your only options for the interior would be black or medium saddle.

The total production figures for the Corvette Sting Ray continued to rise, steadily following the trend from previous years. The same was true for the coupe-convertible ratio. During the 1960’s, the convertible had been much more popular than the coupe. During the early 1970’s the trend shifted rapidly and turned the numbers upside down. For the 1972 year model, 27,004 cars were built and slightly over 75 percent of them were coupes. For the new 1973 Corvette Sting Ray, the total production rose to 30,464 and nearly 84 percent of them were coupes.